Wax printing is a wax-resist dyeing technique by dipping a specially designed knife into melted wax and painting various patterns on pieces of white cloth. The wax stays on the cloth and often cracks after it hardens. Then the cloth is dyed by soaking the cloth in one color, removing the wax with boiling water, and repeating if multiple colors are desired. When the wax is boiled away, beautiful finished patterns appear.

Wax printing has a history of over two thousand years. According to the Book of Later Han Dynasty (25-220), the history of wax printing can be traced back to the Western Han Dynasty (206BC-8AD). It was then called “La Xie”. Ancestors of the Miao people in southwest China already mastered the wax printing craft in the first century. As early as in the Qin (221BC-207BC) and Han (202BC-220AD) Dynasties, people in southwest China found that wax can prevent from dyeing, then they proficiently mastered the craft of wax printing. The Miao people greatly emphasized on their costumes which were made up of decorative fabrics which they achieved by pattern weaving and wax resist. Almost all the Miao decorated hemp and cotton by applying hot wax then dipping the cloth in an indigo dye. By the Western Jin Dynasty (266-316), a dozen of color wax printing products could be produced. After the widespread knowledge of wax printing during the Tang Dynasty (618-907), wax printing became yet another commodity exported to Europe along the ancient Silk Road.

Miao women are washing batik cloth by the river

Nobody knows how wax printing was invented, but an interesting story about a “wax printing girl” told us something about it. Long time ago, a girl living in a stone village called Anshun, now a city in Guizhou Province was fond of dyeing white cloth blue and purple. One day, After she woke up, she found that there was a white dot left on the cloth, which looked very pretty. The young lady then passed the technique to her relatives and friends. Accordingly, Chinese wax printing came into existence. 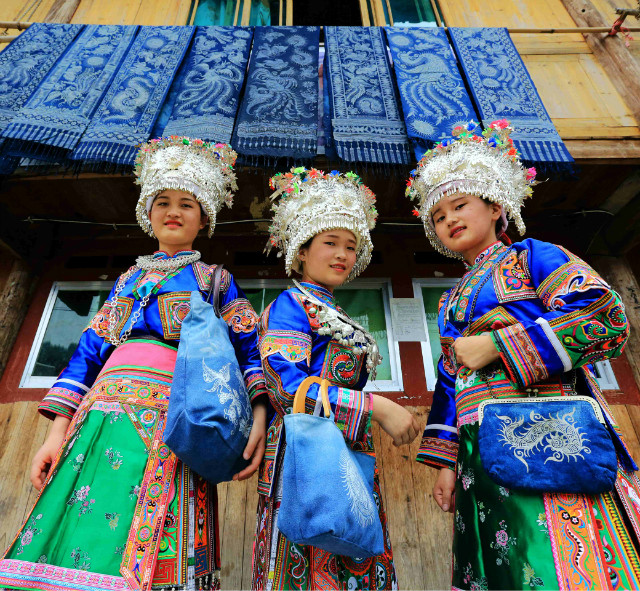 Chinese batik has been dying out as society has developed. Now it becomes more and more difficult to find a wax printing in urban areas. However, it has been handed down from generation to generation among the ethnic people in Guizhou, China. This comes as no surprise, as in the long-term isolation of backward environment, residents here gradually form a self-sufficient way of life and the ancient art of Chinese batik is retained. Among the Miao nationality, all women are obliged to inherit wax printing skills. Every mother must teach their daughters to make wax printing. Miao women learn the skills at an early age so that they plant indigo cotton, spin and weave, paint wax, dip dyeing and tailor. In this case, these Miao neighborhood formed a wax printing art oriented clothing attire, marriage festival rituals, social way, funeral customs and other cultural ethos. 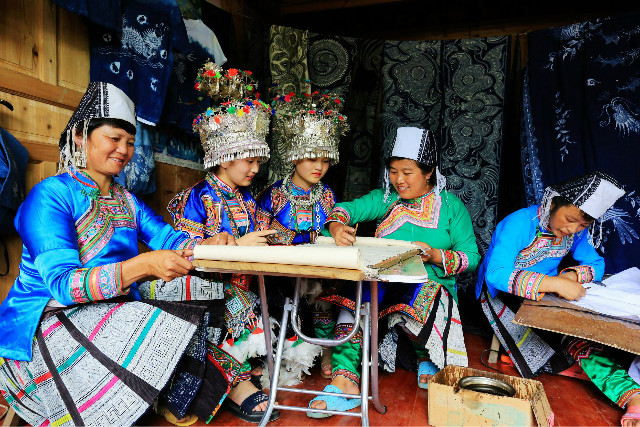 Wax printing has been handed down among the ethnic people

Based on people’s understanding and duplicate use of material properties, Miao’s wax printing has great value in practical application and is widely made into common things in daily life, including women's clothing, bedding, turban, scarve, backpacks, table-cloth, straps, funeral burial and so on.

Its designs incorporate local people’s rich passions and lifestyles, which is described as the “flower of eastern art”. The more traditional designs are geometric, where the most skilled wax resist reads as a fine blue line on a white ground. They use very finely drawn circular and double spiral designs representing the horns of the water buffalo, symbolising their ancestor's life and death. The Miao ethnic group have a preference for dyed-blue fabric with white flower blossoms that seem to leap out of the cloth. Influenced by the Han Chinese, more figurative designs like flowers, birds, fish have been introduced over the centuries. The artistic language is simple, pure, straightforward and powerful. For example, the pattern of the fish is similar to the butterfly in that it also praises reproduction and beauty.

■ Fabrics: Natural or vegetable fiber fabrics, such as cotton, linen and silk

■ Wax: Wax can be used from candles or beeswax

■ Brass Knife: To move the melted wax to fill designs

■ Cold Water: To dye and fix the wax

The main process of wax printing making is delicate. Before wax printing, Miao women need to bleach and wash the cloth produced by themselves. They dry the cloth in the sun and then use an ox horn to rub down and polish the cloth. A slab stone is a natural mill ironing station.

Then they should draw some designs or contours of images on a piece of white cloth, and use a special brass knife to scoop melted wax to fill in those designs or contours as it hardens on the cotton cloth. The usual tools for applying wax are of copper and brass with bamboo handles. Chinese batik had another name in ancient times, to be exact, dye resistance by wax. They use beeswax and worm wax as materials in preventing dyeing. It means to use wax to prevent the dye from reaching all the cloth. Wax dissolves in water and dye is aqueous, so dye will not penetrate the fabric with wax on it. As long as they destroy the wax and form a kind of texture, the dye can penetrate. This is the essence of wax printing and the soul of wax printing.

Indigo is used chiefly for the basic cloth to give dark blues throughout Guizhou. A paste is made from the harvested plants which have been soaked in a wooden barrel. Later, the cloth is immersed completely in a jar of indigo dye bath so that the unwaxed parts take on color. The wax is often heated in a little pot, resting in hot embers. Beeswax is the main ingredient but other resins or wax are possibly added. Beeswax is both tenacious and flexible. The wax resist never exploits crackle, with the aim to produce a clear image.

Once applied, the wax appears black on the fabric. At the end, the wax is removed from the fabric. The fabric is then rinsed in cool water and air dried. The beeswax can be reused.

The whole process is eco-friendly. The materials can all be grown or made naturally anywhere. The beeswax is even reusable after dying the fabric. The ever widening range of techniques offers you the opportunity to explore a unique process in a flexible and exciting way.

■ Fabrics: Natural or vegetable fiber fabrics, such as cotton, linen and silk

■ Wax: Wax can be used from candles or beeswax

■ Brass Knife: To move the melted wax to fill designs

■ Cold Water: To dye and fix the wax